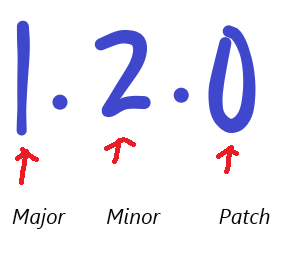 Every time you release a public (API) software you must update his version number.

The (public) version is universally composed by 3 numbers separated by a point:

Each version number has a semantic representation

10 is the Major version

2 is the Minor version

5 is the Patch version

All of these 3 numbers are always

So if you see a version number like: 1.1.5 it means the last 5 releases were about fix bugs.

As opposed to Patch, Minor means that they have been released new (interesting) public feature, without impacting old ones.

When the Major number is incremented the release contains new (fantastic) features, buuuut it means that all the old features are not anymore compatible! So if you depend on those, pay attention.

If you think about it, these versioning rules could be applied also to humans.

Each 1st of January we always have new proposals for our self, so it’s like we “would” change our Major version. Or whenever we learn something new we could upgrade our Minor version.

But when do we change our Patch Number? Maybe each time we have makeup?